In this lab, you will learn several ways to get a python data science development environment. Before you can craft, you need a crafting table. And we can't just go around punching trees!

Part 1: Musings on Jupyter: Why, and Where

Also consider: academic journal articles often have a “data replication” problem. What code led to the tables and figures in a paper? The open science movement pushes for code to be included in papers’ appendices. Jupyter notebooks meet that goal.

One downside of Jupyter notebooks is that it’s difficult to do live google-doc-style collaboration. From my understanding, this is a limitation of the underlying notebook data model, making a shared data model between collaborators difficult to implement. But as of 2022-01-17, it looks like live collaboration is in beta!

Editing Jupyter notebooks requires a running notebook server. Browsers are one way to interact with that server.

A Jupyter notebook server can be run from anywhere you can install the python packages.

Alternatively, you can use a jupyter notebook server hosted somewhere else.

A few ones on cloud computing platforms (variable resources in exchange for your $$):

Jupyter notebooks can be converted into other read-only formats, including HTML, using an included tool called nbconvert. Several online tools will run nbconvert for you, and show you the HTML output. These include:

How to choose where to run your jupyter server?

The importance of reproducible notebook environments

You need notebook environment reproducibility if:

If your notebook requires hard-to-install packages, do you want someone else to have to install those packages to be able to run your code? That might take hours or days of fiddling.

Or maybe you want to be nice to future-you. Steps you take today to configure your environments can be a huge pain – do you want to have to repeat it?

Your code might need special python packages, as well as special system applications.

For python packages, the important thing to know is this: Jupyter will have access to any package installed in the python environment that is running the jupyter server.

What’s the deal with Anaconda?

Anaconda is amazing if you need specific python packages. It’s great because it is bundled with many packages that data scientists already need. If you had to compile these packages from source (like if you installed via pip), you might spend a lot of time configuring your build environment. If you find yourself in that position, consider Anaconda. instead (or Docker).

conda is a package manager through which you can install more packages. Anaconda includes conda. The conda package ecosystem doesn’t have as many packages as does the pip ecosystem.

**NB:** `conda` and `pip` don't play well together. Once you start installing packages via pip into an environment, you're likely to hit problems if you try to use conda to install afterwards. So, once you use pip in an environment, environment, don't ever install via conda into that environment again.

Confession: Years ago, I used to think that Jupyter(Lab) was specific to Anaconda, because the first place I saw Jupyter was in Anaconda Navigator, where it gets its own big square on the UI. That made me not want to use it because it feels like it takes so long to launch Anaconda Navigator.

But Jupyter is not specific to Anaconda!

And you can get precompiled packages without Anaconda! Instead, you can use Docker jupyter notebooks. Specifically, Docker images from the Jupyter Docker Stacks. Browse the list there and you’ll see environments ready-to-go with heavy-hitters like tensorflow, pyspark, Julia, R. Whereas Anaconda includes packages that can work on multiple systems, Docker says “forget that multi-OS crap” and chooses just one OS to build the packages for, and then runs that single OS everywhere. I therefore prefer Docker, because I prefer things that say “forget that crap.” And Docker is so relatively easy to launch in different places, compared to fiddling with configs. You’ll see!

Part 2: Use a Jupyter Docker Stack

There are Docker containers that already contain Jupyter, maintained by the Jupyter organization. You’ve already used one in your other classes, but you need to use moar of them. And understand them moar. Moar!

Check them out here. Browse their different available docker images. Note the variety of included packages!

The further down the list you go, the more packages come pre-installed in the image. Many images inherit from one another. But also, the bigger the image becomes, so the longer it takes to download.

Which one is your favorite?

Do all of the steps in this part from a new project folder on your computer. This project will store your datascience jupyter environment – you might call it “my-datascience-notebook”.

Do not nest this folder within another project folder!

Create a local git repo and publish it to GitHub

Use Github Desktop to turn your project-folder into a git repository. To do this, you can use the File > New repository... menu item. pointing it to your already-existing directory. The trick is to point the “local path” to the directory containing your folder, and to name the repository the name of the folder that already exists. For instance, if my folder were called my-datascience-notebook and if that folder were located in local path C:\Users\deargle\projects, I would enter the following: 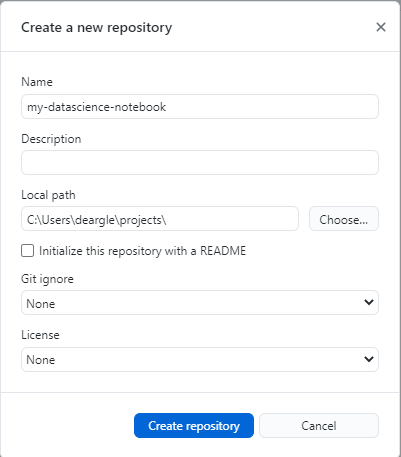 You should then have an option to publish your repo to Github. You can do this even if you don’t yet have any commits – Github Desktop creates one for you.

Only monsters have repos without READMEs. Make one – have it start with the name of your repo. For instance, if my repo were named my-datascience-notebook, I would start with a README.md with a level-1 header like this:

I know you’ve already used the jupyter/pyspark-notebook image from this collection in another class. Now, use Docker Desktop to run the jupyter/datascience-notebook one. Follow the tips in the quickstart.

You can use the following docker-compose.yml file to run the container:

But imagine that the image doesn’t have your favorite package, eli5. How could you get eli5 running in your jupyter environment?

Option 1: You could install it every time you create a new docker container, via running !!pip install eli5 in a jupyter notebook cell.

Option 2: You could build a custom docker image that already has it installed.

Read over the guide here. But don’t do anything yet.

Then, follow the link to the “Docker Hub image tags” from the docs page for the image. For perfect environment reproducibility, we want to use a tag that will always point to the same docker image version. The “digest” is a hash (fingerprint) of the image version. We can’t use the latest tag, because that always points to the most recently released tag. But multiple tags can point to the same digest. So:

The below Dockerfile is a modification of the one from the example.

Create a requirements.txt file and pin your package versions

Pin your package version, for the sake of environment reproducibility. To see what the latest version of eli5 is that pip install eli5 will install, search the internet for pip eli5 and click the link for https://pypi.org:

Then, note the package version:

Build your image and run a container

Once you have that Dockerfile, build your own image from it by running the following snippet from the docs:

Run the following to look at your new image:

Run a docker container from your image!

Lab deliverable todo: Update your README.md with the instructions (notes-to-self) on how to use your image with docker

It’s so beautiful! But it only exists on your computer, and you want to share it. What can you do?

Option 1: The image it is FROM is hosted publicly. So you could just publish your Dockerfile in a public place like GitHub, and let others build it themselves.

Option 2: Or we could do one better and publish our dockerfile to a public docker image repo, such as DockerHub!

Lab deliverable todo: Update your README.md with a link to your DockerHub image (use Markdown!)

We can do all of the same with the conveniences of docker-compose.

Read the overview of docker-compose.

Then, create a docker-compose.yml file like mine below. Read the explanatory comments.

N.B.: This one is different from the earlier docker-compose.yml file, because it includes a build tag *and* an image` tag.

Lab deliverable todo: Update your README.md with instructions (notes-to-self) on how to use your image with docker-compose.

Your repo should now have the following files:

Now you have a Dockerfile in a public github repo. That means we can use another free online service called MyBinder. This service builds jupyter notebook docker containers and runs a jupyter server instance that you can access from your browser. If we point it at our repo with our Dockerfile, it will run a Jupyter container from an image from that Dockerfile.

If your repo also includes .ipynb files, it will open those notebooks in editable mode.

Since your github repo is public, you can point MyBinder at it. Do it: 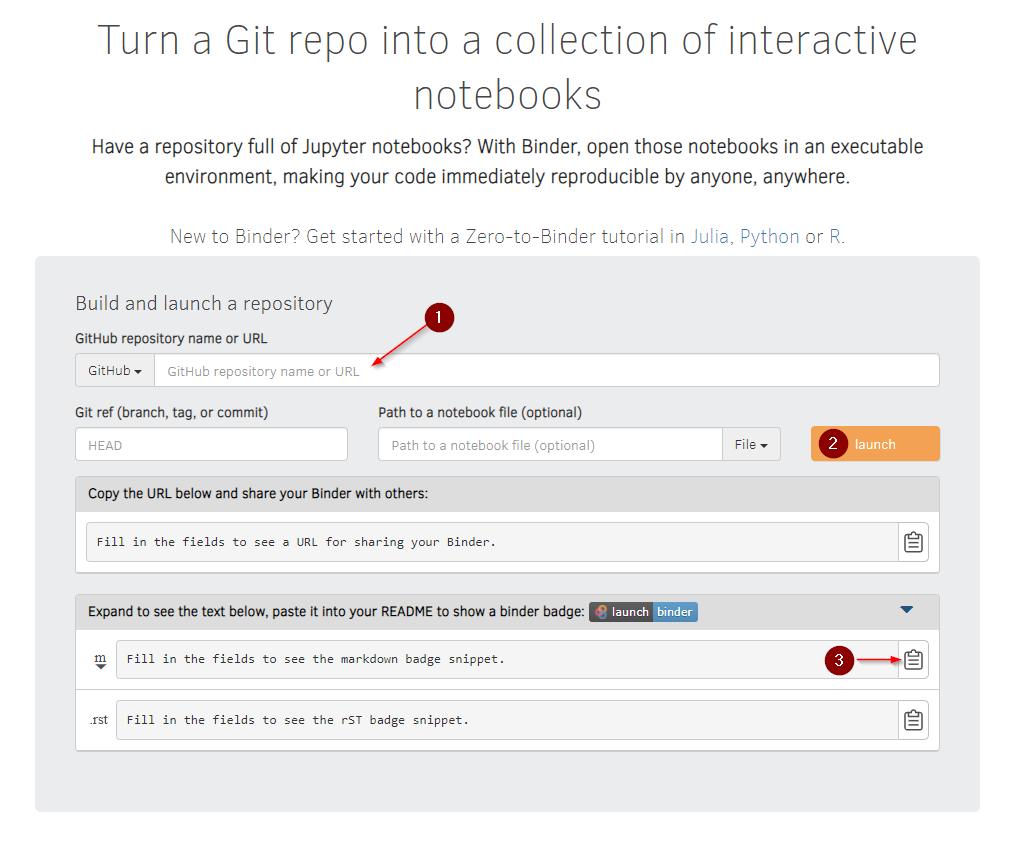 Your deliverable is to submit a link to your github repo that meets the following requirements:

Here’s a README template to fill in:

Question : Submit a link to a github repo that fulfills the above requirements.

Adding a CI/CD GithubAction to deploy to DockerHub

With our current setup of needing to manually and separately run docker push and git push, there’s a risk that the two will get out-of-sync. We can fix that by adding a Github Action to our repo that will automatically push an update to DockerHub every time we push to our github repo.

To do this, see the following resources:

Also, see peter-evans/dockerhub-description to get your repo’s README posted as your Docker Hub repo’s description.

If you need extra computing power, you can run Jupyter Notebooks on cloud computing platforms, such as GCP’s Vertex AI Managed Notebooks Instance. This service aims to make it ridiculously easy to crank up your available resources with just a few clicks, and get them to run in a number of environments. 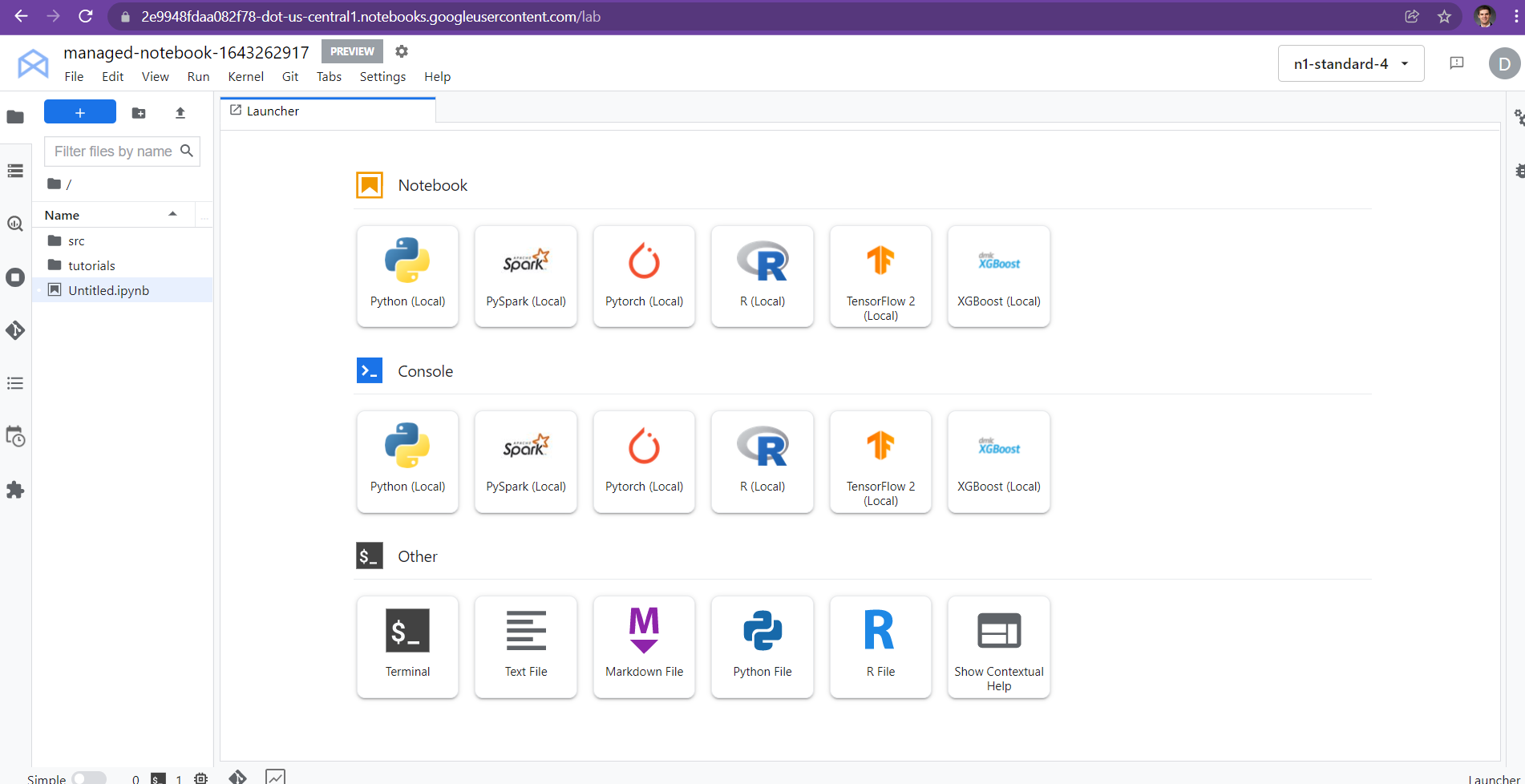 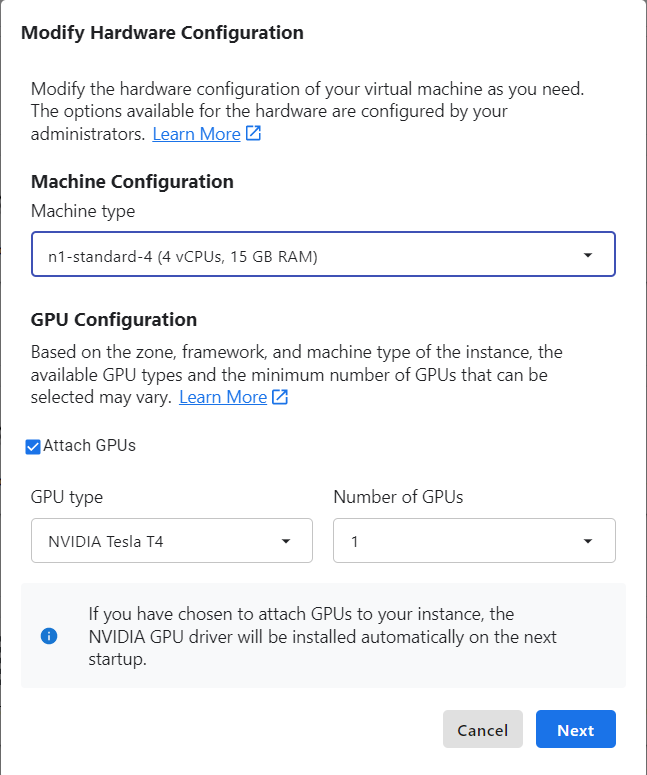 If you need more environment customization, you can instead launch a User-Managed Notebooks Instance. You could even launch your custom DockerHub image into one of these, although you’d need to do further modification to it to make it compatible with Vertex AI 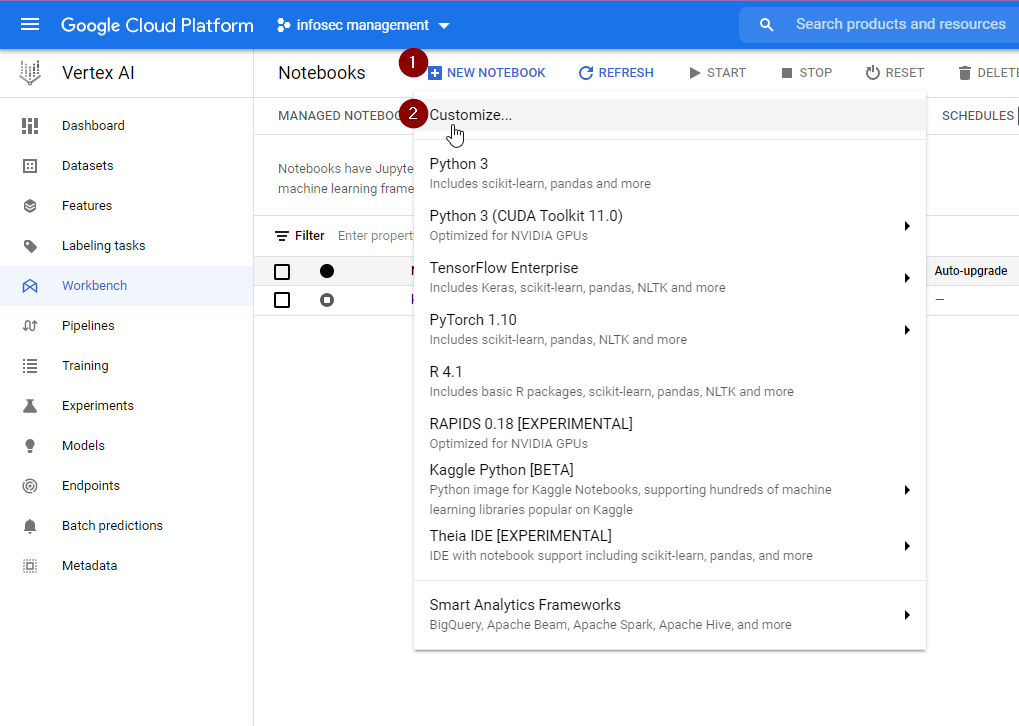 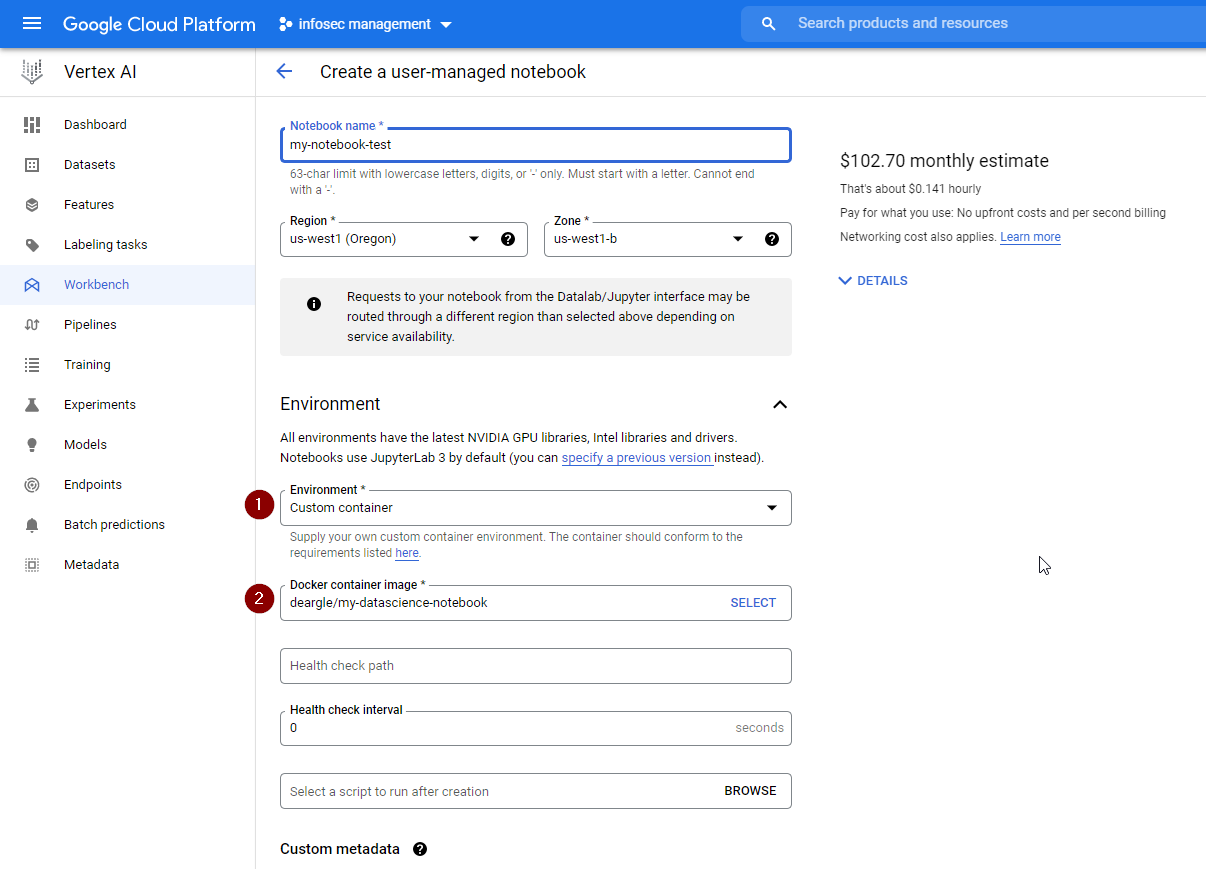 Under the hood, these launch a virtual machine, run docker pull and docker run in it for you using jupyter docker container you specify, and then set up some convenience ways to make it easy to access the notebook server. The convenience is nice.